Used Metal Hacksaws, Circular Metal Saws 4 Items
Categories
Filter
Subscribe to search
Not found what you are looking for?

In 1919, the first BEHRINGER mechanical workshop was opened, which heralded the start of the BEHRINGER GmbH company we know today. The BEHRINGER Group acquired the circular saw specialists EISELE in 2000 and expanded their range accordingly. The company is now being run by the third generation. It employs 400 members of staff around the world and exports to more than 70 countries. 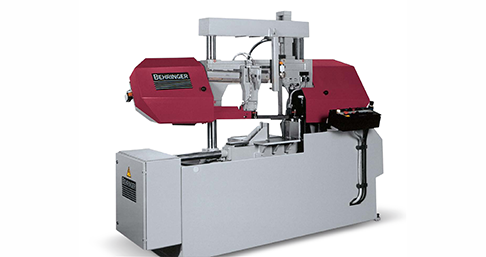 BEHRINGER semi-automatic HBP bandsaws are capable of cutting through everything: from dividing up pipes/profiles through to solid material with difficult machining properties. These semi-automatic devices are especially suited to processing low piece numbers and one-off cuts, even where there are frequently changing cutting lengths or the cuts are already marked on the material. The 90° (round) cutting range spans from 260 to 1000 millimetres and for 90° flat; 300 x 260 up to 1000 x 1000 millimetres.

The fully-automatic machines of the HBP Series are truly versatile devices used for dividing solid materials, pipes and profiles. The 90° (round) cutting range in the fully-automatic machines is between 260 and 1000, for 90° flat; it is between 300 x 260 and 1000 x 1000 millimetres. The robust and powerful bandsaws of the HBE DYNAMIC Series are extremely energy efficient. In the 90° (round) cutting range, these machines can cut up to 260 to 660 millimetres (depending on model). The 90° (flat) cutting range spans from 300 x 260 up to 710 x 600 millimetres.

Wherever there are high piece rates and very hard steel materials, the powerful bandsaws of the HBM Series are the ideal choice thanks to their outstanding cutting performance. The 90° (round) cutting range is between 440 and 510 millimetres, and for 90° (flat); between 440 x 440 or 1200 x 800 millimetres. 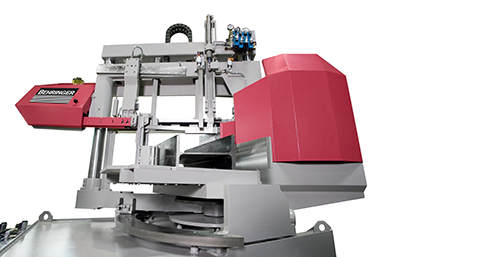 The fully-automatic machines of the HBP Series are specially designed for machining structural steelwork and are capable of automatic left and right mitre cuts. Popular devices include the BEHRINGER HBP 220 semi-automatic bandsaw and the (no longer produced) BEHRINGER HBP 320 band saw. Fully automatic mitre cuts can be performed on both sides of a given workpiece using a numerically controlled (NC) feed gripper in conjunction with an NC saw frame mitre box. The 90° (round) cutting range lies between 310 and 810 millimetres, and for 90° (flat); between 400 x 310 and 1000 x 800 millimetres.

The swing frame bandsaws of the SLB Series are ideal for dividing pipes, profiles and solid materials made of metal and comparable plastics. The two models in the series are capable of making mitre cuts from + 30° through to - 45° and feature a scale for setting the exact angle. The 90° (round) cutting range lies between 240 or 260 millimetres, and for 90° (flat); between 280 x 210 and 370 x 260 millimetres. 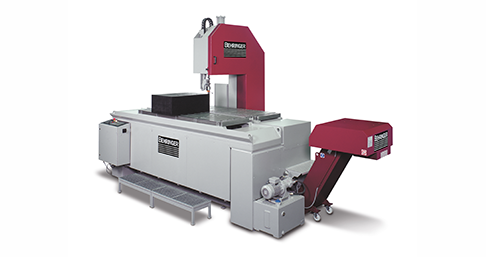 BEHRINGER produces a varied range of 25 vertical saws in their LPS Series. The vertical saws in this range are especially suited to the production of blanks in all plate dimensions and thicknesses. Their cutting width ranges between 680 and 1600 millimetres; cutting height between 200 and 1200.

The fully-automatic machines in the LPS range can perform cutting procedures lengthwise and crosswise. Cutting widths of between 680 and 1600 millimetres can be achieved, depending on model. The cutting height ranges between 400 and 1000 millimetres.


The company produces semi- and fully-automatic saws, gantry machines and table-design saws within their HBP Series. 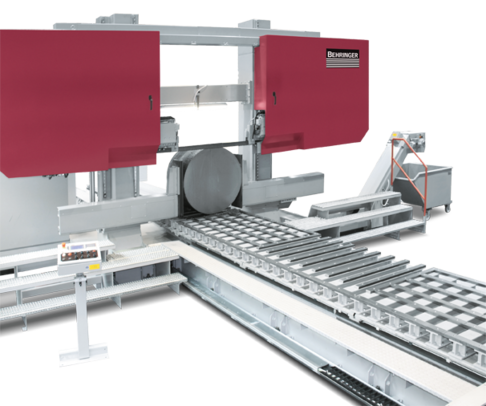 The BEHRINGER HBP Series features a range of versatile devices in fully- and semi-automatic versions. With their semi-automatic devices, the material is transported by the operator, whereas their fully-automatic saws feature CNC processes to automatically cut and divide solid materials and pipes using a feed gripper unit. The 90° (round) cutting range can be between 1100 and 1500 millimetres. The minimum width is between 100 and 500 millimetres, depending on model.

BEHRINGER gantry machines are robust yet space-saving. These ultimate cutting machines can achieve cutting ranges of between 1100 and 2100 millimetres in their 90° (round) cutting range. For 90° (flat), the cutting range is between 1800 x 1800 and 6500 x 1800 millimetres. The devices are widespread in forging mills, die-casting foundries, and steel finishing plants.

BEHRINGER table-top machines are multi-talented heavy-weights ideal for bulky materials. They are supplied as semi-automatic devices but can be fully automated if required. The 90° (round) cutting range lies between 1100 or 1500 millimetres, and for 90° (flat); between 1100 x 1100 up to 1800 x 1500 millimetres.

As used machinery, BEHRINGER saws are still a wise investment and they can be found in large numbers on the second-hand market, especially the automatic bandsaws of the HBM Series and the fully-automatic saws of the HBP Series. The latter regularly feature build dates in the 1980s and 1990s, but occasionally newer models from 2000 onwards can be found.

For a time, the company also produced hacksaws, which can also be found frequently in second-hand marketplaces, mostly featuring build dates in the 1970s. Spare BEHRINGER saw parts are available for BEHRINGER saws and other BEHRINGER equipment, and if maintained adequately, used BEHRINGER saws from Germany can be an ideal alternative to purchasing brand new machinery.

Check out these awesome items on Surplex:
Used BEHRINGER machinery