HOLZMA Panel Dividing Saws was founded in 1966, making it one of the younger generation of German companies, but this has not stopped it from setting new and advanced standards within its product field. As the name might suggest, HOLZMA products are primarily aimed at dividing panel materials. The company has a wide selection of saws and panel-dividing technology for small- and industrial-scale needs. By 1987, HOLZMA had signed a cooperation agreement with Homag AG, which led to its complete integration into the Homag Group as an independent company.

Soon after being founded by Erwin Jenker, HOLZMA GmbH built itself a reputation in Germany and across the world for its innovative tool machines. HOLZMA’s saws and panel-dividing equipment were soon fitted with advanced hydraulic motors and electronic controls. The main advantage of their tool machines was the cutting process, which enabled clean cuts to be made in coated panel materials. HOLZMA’s range of saws is divided into series 1 to 6 and P. The company also supplies other innovation solutions, such as the multiTec System or single-panel saws.

Below is an overview of the company’s product range:

The saws in HOLZMA’s number 1 Series have been specially developed for certain types of user. This includes, for instance, the HOLZMA HPP 130, which is aimed at ambitious craft workshops. The HOLZMA HPM 120 model, on the other hand, is intended for the South American and Indian market, and the HOLZMA HPP 180 was developed more specifically for Asia, particularly China and India.

HOLZMA indicates that their Series 2 panel-dividing saws are ideal for small quantities, such as would be the case for small-scale woodworking operations and newcomers to the field, but also larger companies that regularly need to process small batches. HOLZMA saws from Series 2, such as the HPP 230, are characterised by a particularly favourable price-performance ratio.

Even as basic models, Series 3 saws provide everything you could need for dividing panels thanks to their indispensable standard equipment and wide range of additional features. By only choosing the options which are necessary for your operation, procurement costs can be kept to a minimum. Nevertheless, Series 3 saws can be upgraded at a later point to adapt to changing requirements. The three basic models: the HPP 300, HPL 300 and HKL 300, offer varying levels of performance and provide everything that could be required by a range of users – from the crafts sector through to industrial operations.

Series 4 is structured like Series 3 but is primarily intended for users who need a high-performance HOLZMA beam saw. As with Series 3, the HOLZMA HPP 400 is the most basic model. The HOLZMA HPL 400, on the other hand, is equipped with an integrated lifting table for automatic feeding, and the HOLZMA HKL 400 is an L-shaped system designed for continuous operation. In contrast to the HKL 300, models from Series 4 are capable of cutting through large volumes of panels.

HOLZMA’s Series 5 saws are designed for operations requiring a high level of output. Here, too, you will find the basic models HPP, HPL and HKL 500. The smaller series are distinguished by differences in performance, such as saw blade projection of 150 mm, or even 170 mm. The top model, the HOLZMA HKL 500, is fully automated. 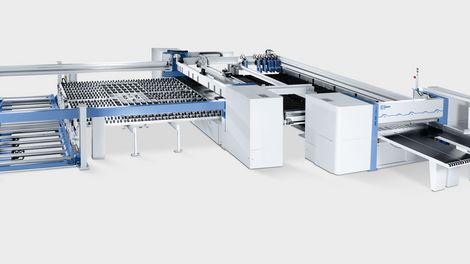 The highest numbered series in HOLZMA’s saw range was specially developed for large-scale, serial production. This can be seen in the saw blade projection of 190 mm, amongst other high-performance aspects, which provide additional freedom when cutting stacks, or ‘books’, of panels. 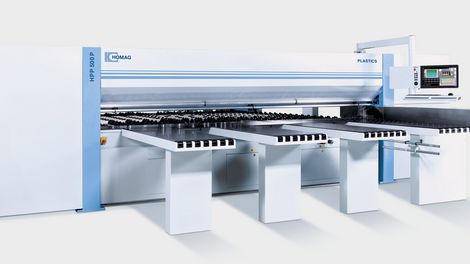 Saws from HOLZMA’s P Series are designed for working on plastics, non-ferrous metals, and construction materials in panel form. The different versions of the basic models HPP 200 to 500 can also be found in this series.

The multitec option expands the range of tasks that can be performed by HOLZMA panel-dividing saws by adding drilling and routing to the standard saw function. These features make it possible to complete all three processing steps in one operation, be it on wooden, non-ferrous metal, or plastic panels.

HOLZMA’s single-panel saws are the company’s answer to the batch-size-one market. These beam saws enable individual, single batch items to be created as efficiently as in serial production. The most notable features of their single-panel saws are their fully-automated single cutting process, limitless subsequent cuts (automated), optimal use of materials as in serial production, as well as increased energy efficiency.

The handling systems manufactured by HOLZMA can optimise process flows when transporting materials into and out of the saws. Intelligent solutions, including HOLZMA feeding and destacking systems, handing systems within the saw, as well as offcut handling, help operators save time, conserve delicate materials and leave their staff free to focus on other tasks.

Check out these awesome items on Surplex:
Used HOLZMA Machinery