Used Power Tools, Bench Grinders, Workshop Equipment 18 Items
Categories
Filter
Subscribe to search +
Not found what you are looking for?

METABO AG is one of the best-known German manufacturers of power tools. The characteristic type of green used for tools and cases are the visible trademark of this company. METABO’s products are of the highest quality, due to the craftsmanship of these power tools. The name METABO is a derivative of the German name for the metal drill, “Metallbohrdreher”.

The History of the Company

The son of a baker, Albrecht Schizler from Nürtingen, taught himself how to build a hand drill. This was a big success right from the beginning and 50,000 were sold. In the end, Schizler GmbH was founded. Julius Closs was the co-founder and provided the first production and administration building for the company, taken from his former brewery. After Walter Rauch took over, the company name was changed to “METABOwerke Closs, Rauch & Schnizler KG”.

Due to METABO’s rapid growth, the central office and production facilities were moved to Steinach METABO then took over Elektra Beckum in Meppen in 1999. An error in brand communication almost meant the end for METABO in 2010. High quality METABO products, which were already well-known, were sold alongside budget products in the shops. This had a bad effect on their reputation. This failed marketing strategy also led METABO’s to a reduction in revenue, which could only be saved through more sales on the market. This occurred through the French investor Chequers Capital in 2012. Since then the impending insolvency and closing of METABO dissipated and the company started making profits once again. Since then, the company has only focused on professional use and has designed its products exclusively for the professional field. This new strategy brought METABO more success.

Today, METABO offers around 50 different types of categories of power tools, which encompass the whole spectrum of possible power tools. In addition to the large range of power tools, METABO also offers unusual equipment like construction site radios. METABO also produces a range of accessories and adaptors for its tools. Stationary power tools are METABO’s second biggest product range. The complete spectrum of hand held tools for woodworking and metalworking is available in around 40 categories. A range of compressors are available to generate compressed air for the cutting tools. In addition to power tools and accessories, METABO also manufactures products, which are not directly related to tools. For example, it produces a range of garden pumps and domestic water works and related accessories like hoses, adaptors and couplings.

METABO made around 347 million EUR in 2010. The company has 1,850 employees and two production centers, one in Germany and a second one in China. Its presence is world wide due to its 23 companies of official distribution. 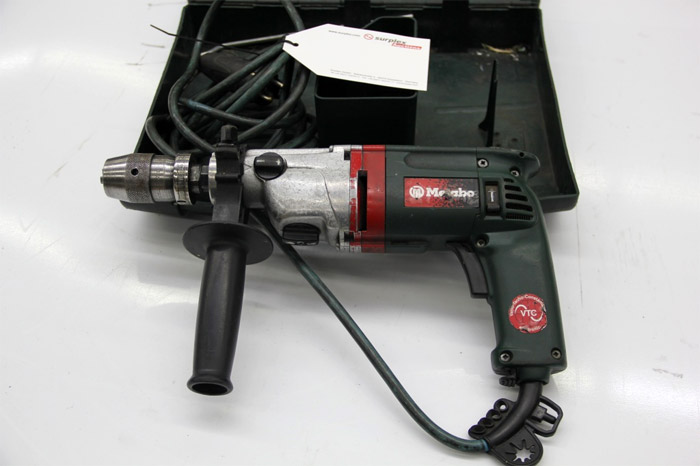 Check out these awesome items on Surplex:
Used METABO Machinery