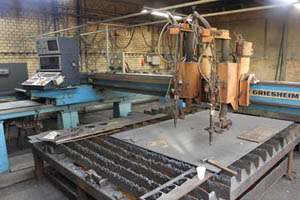 What are plasma and flame cutting machines?

The process of flame cutting involves the use of a "flame" to separate metal workpieces thermally. This flame is created by an accelerated jet of hot gas, which is directed onto very specific areas of sheet metal. For many decades now, plasma has been used in the process because of its ability to reach very high temperatures very quickly. The types of metal the plasma cutting process is suited to include steel, stainless steel, aluminium, copper, brass, molybdenum and titan. Standard flame cutting is still carried out, but only on relatively thick sheets of metal. A flame cutting machine is typically used in fabrication shops, car factories, industrial construction and salvage operations.

This highly effective plasma and flame cutting processes evolved from plasma welding, which was very popular during the 1960s. It offers several advantages over the typical "metal on metal" cutting processes that came before it, which include the production of no metal chips, increased accuracy and the creation of cleaner edges.

What does a plasma cutting machine do?

A plasma cutting machine requires a heat source that is capable of raising the metal to ignition temperature. The oxidisation of the metal creates the necessary temperature; it also produces the stream of oxygen that blows away the oxides. The first flame cutting equipment relied on hydrogen for its fuel, but a modern plasma cutting machine uses acetylene and oxygen.

Operated by a central computer, a modern flame cutter machine or plasma cutter is capable of cutting shapes into metal with an exceptional level of accuracy. While there are still hand-operated alternatives on the market, they are generally used in the salvage and scrap metal industries - which require very little precision and only the most basic of flame cutting devices.

Both flame and plasma cutters are sometimes referred to as an oxy fuel cutting machine; this heavy piece of industrial equipment is available in mobile and stationary designs. A selection of different automatic and manual steering mechanisms is still used in stationary machines. A mobile gas cutting machine usually contains a motor for automated feeding.

The process of plasma cutting is fast and accurate, which makes it perfect for producing the components needed for precision-engineered products such as cars, ships and wind turbines. Smaller operations use the flame cutting machine because of the relatively low production costs it involves. Further savings can be achieved by purchasing a used plasma cutting machine with a long history of productivity and reliability.

Oxy fuel cutting involves creating a channel of electronically ionised, superheated plasma within the workpiece being cut. The flame cutter creates a completed electrical circuit, which connects back to the plasma cutter itself. This is achieved with the use of compressed gas - which is blown at high speed through a nozzle directly into the workpiece. 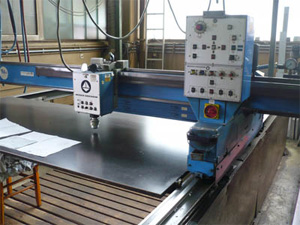 Workspace of the flame cutting machine

The electrical current created during plasma cutting ionises some of the gas (usually oxygen) to create plasma. Electricity, in turn, travels down the plasma, delivering a huge amount of heat - enough to melt the metal workpiece along the channel. While this happens, the incredibly high speed at which the plasma is travelling is enough to "blow" the molten metal away, thus separating it from the original workpiece throughout the flame cutting process.

Where to buy a used flame cutting machine

At Surplex.com, we source metalworking machinery from locations all over Europe. We regularly feature used flame cutting machines on our website - from leading manufacturers in the industry such as ESAB, ZINSER and MESSER GRIESHEIM. However, if we don't have access to exactly what you're looking for today, keep checking the website regularly for details of the next industrial auction or used machines sale. If you want to learn about upcoming metalworking and woodworking machinery sales before anyone else, sign up to the Surplex newsletter.