Overhead cranes for warehouse management in all industries 30 Items
Categories
Filter
Subscribe to search
Not found what you are looking for? 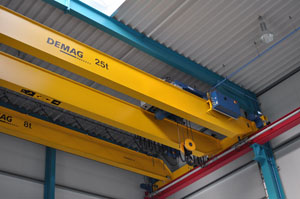 The overhead crane has a variety of applications

The overhead crane is mainly used for the moving of loads in heavy-industry and other industrial sectors. It is made out of a crane bridge that carries a travelling trolley. This travels across the crane bridge using steel wheels. The crane bridge moves along parallel tracks. This means it is possible for every area that lies under the crane’s tracks to be reached. The movement of the crane bridge is also determined by the construction of the tracks. These are mainly located on the outer walls of the hall.

The travelling trolley is similar to a small carriage, which allows for the diagonal movement of the crane. A strong steel rope on a roller has, among other things, a crane hook. Loads can be hung on this crane hook and transported. The overhead crane can also be used for outdoor work. There are travelling bridges, over which the contents of a train carriage can be loaded onto lorries. Overhead trains are often used in the steel warehouse of a plant. The overhead crane is steered from the ground using a control panel or via remote control. It is also common to have an operator’s cabin that moves along with the trolley. 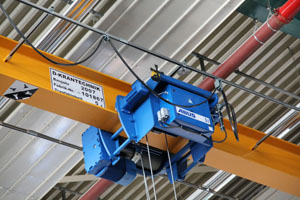 History and background of these machines

The crane has existed ever since materials and workpieces have needed to be transported. The overhead crane was developed for the special implementation of moving heavy loads within a restricted space. A overhead crane can be positioned exactly where it is needed and allows for the delicate lowering of heavy loads, also in areas of limited space. Overhead cranes were implemented with the development of the first steel and machine construction companies. Since the introduction of CNC-technology, fully automatic overhead cranes were developed to be used in the production process.

Areas of application and examples of overhead cranes

Overhead cranes are used to move heavy workpieces like pallets or boxes in a variety of sectors including warehouse management, steel and machine manufacturing, and for loading and unloading. 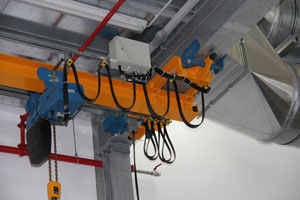 This crane is also used for the transportation of bulky material that can be moved using a gripper. It is most commonly used in tight factory workshops, where it transports material from pallets and boxes to the machines, and unloads completed workpieces to be transported away. The loading of a vertical lathe is done using a overhead crane. Surface plates are switched around to be loaded and unloaded near the machine.

Several companies have specialised in the manufacturing of overhead cranes. Some of the most recommended suppliers include: 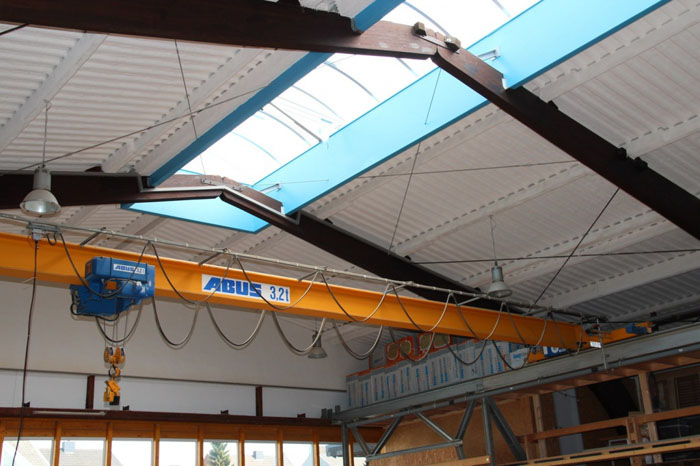 Check out these awesome items on Surplex:
Overhead Cranes