ALZMETALL is a medium-sized company which has made a name for itself in the development and manufacture of heavy-duty industrial machinery. The company’s roots are in foundry technology but they soon expanded to include machinery for finishing/machining the cast parts. Today, ALZMETALL focusses on drilling machines, machining centres, specialist machinery and foundry applications.

ALMETALL produces stationary drilling machines for workshops, manufacturing and training purposes. The company offers a wide selection of products, especially pillar and column drills, and is known for its high-quality solutions right down to its smallest products.

ALZMETALL is thus a counterbalance to the cheap and widespread imported table boring machines, which are currently flooding the market. Even when used, ALZMETALL bench, pillar or column drilling machines are still preferable to a cheap imported machine from an unknown manufacturer. 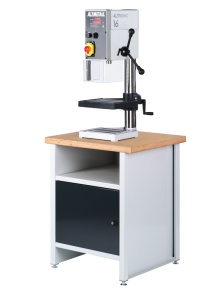 The ALZTRONIC Series features entry-level machines for smaller operations. They are ideal for laboratory technology, the manual processing of wood, plastic and non-ferrous metals; as well as training. ALZTRONIC drill presses are characterised by simple operation and very attractive price tags. These small drilling machines are generally equipped with a 230 V power supply. There are six types available from the ALZTRONIC Series. Depending on the version, they can bore holes with diameters of between 6-16 millimetres into E 335 steel. ALZTRONIC devices are designed as bench drilling machines.

With a motor output of up to 3000 W, the three ALZMETALL column drilling machines of the AX Series belong to the professional league. Nevertheless, ALZMETALL sells these high-quality column drilling machines at prices of less than 10000 euros. This makes them an interesting prospect and powerful investment for workshops and smaller industrial operations. The drilling performance with cross-sections of up to 55 millimetres in E335 steel speaks for itself.

For truly powerful, continuously operating drilling machines for larger series, look no further than the ALZMETALL AB Series. The four powerful ALZMETALL column drilling machines are highly regarded for their precise handling and excellent continuous operation capabilities. They are designed for cast steel and E335, and can produce drill cross-sections of up to 60 millimetres.

For demanding applications requiring chip-free, flow drilling, the models from the ALZMETALL ALZFLOW and AB-Flow are the ideal choice. High pressures and rotary speeds of up to 4000 rpm make these machines very manageable for specialist applications. Conventional drilling and thread-cutting are also possible using ALZMETALL flow drilling machines. ALZMETALL offers a range of promising radial and series drilling machines to ensure formed parts (including series of parts) can be drilled using a defined bore hole template. They operate more precisely and reliably than any CNC milling machine and can relieve the strain on more expensive CNC systems thanks to their mono-functional design. 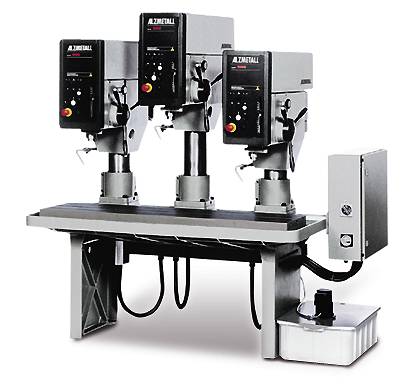 The AB 30s are primarily designed for individual pieces and manual machining. ALZMETALL has also developed rapid radial drilling machines for operations requiring higher productivity. The ALZSPRINT 30 features a wide range of programming functions, which make the serial processing of workpieces especially efficient. Drilling performance of up to 32 millimetres in E335 steel makes the ALZSPRINT a high-performing piece of equipment.

In addition to its drilling machines, ALZMETALL also offers a selection of machining centres. 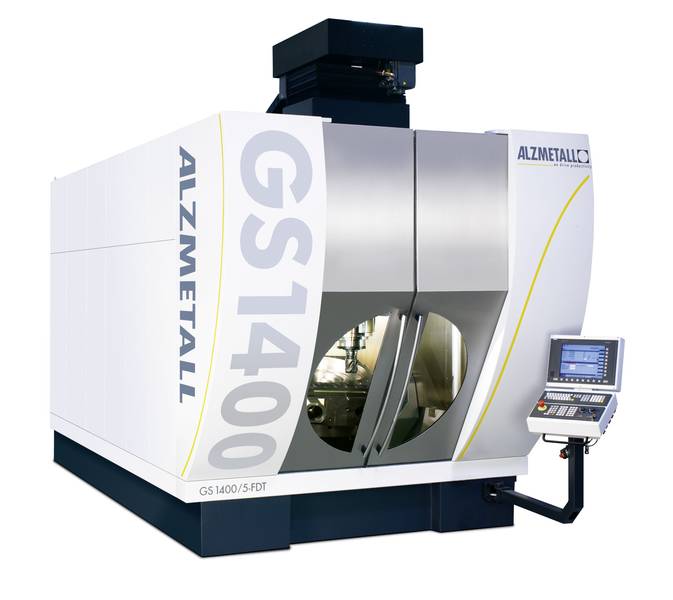 
The more conventional devices are found in the CS Series. ALZMETALL supplies these four types with torsionally-rigid machine bodies, which are protected against vibrations by flat guide tracks. The devices are highly rigid and durable thanks to use of spheroidal graphite iron. ALZMETALL has been able to create especially long travel paths along the Z-axis and their machines are also capable of simultaneously working on the fourth and fifth axes. Featuring seventeen different models, ALZMETALL’s GS Series of machining centres is comprehensive. Ease of use, efficiency and durability were the company’s main areas of focus when developing these model series. GS Series machining centres by ALZMETALL have set new standards in the sector thanks to their single-part base frame made of spheroidal graphite iron. These machines also make it possible to process cast parts made from hardened metal with the same consistently high quality.

ALZMETALL is not only a provider of interesting series solutions; they also cater to specific requirements through proprietary developments. The skills and products which result are, of course, also made available to other clients, which means ALZMETALL has been able to gain deep knowledge of how to develop specialised solutions.

In addition to manufacturing machinery, ALZMETALL also provides contracting services for cast steel and the machining of cast-metal parts. The company also gains valuable experience from the processing of products for their clients, which is continually incorporated into the development of their own machines. As such, we can rest assured that ALZMETALL’s future machines will continue to be as innovative and high-performing as their current range.

Check out these awesome items on Surplex:
Used ALZMETALL Machinery