OM Carreli Elevatori S.p.A is a leading industrial machinery company that have been in operation since the early 1900's. This company has long been considered as a forerunner in the industrial field, producing and a wide range of automobiles, buses, trucks and railway equipment, attachments and spare parts, since 1951. OM Carreli Elevatori S.p.A offer sales, technical and spare part delivery services. The company's administrative offices are based in Lainate, Italy, while production plants are located in Luzzara and Bari. OM is a part of the KION group (Linde, Still, OM).

Journeying Through the History of the Company

OM was founded in 1917, in Brescia and in 1918, they were already producing automobiles. By 1937, OM had merged its two plants in Milan and Brescia together and began to include buses, railway equipment, forklift trucks, agricultural tractors, marine engines, motor pumps and cooling systems, to their production line. In 1967, they became a part of FIAT, involved in the Industrial Vehicles Division and in 1977, OM became a division of the IVECO group, Carreli Elevatori. OM moved the corporate headquarters to Lainate, in 2000. Following the divestment of shares from FIAT, the company once again changed its name to OM Carreli Elevatori S.p.A. The unification of OM, STILL, Linde and Hydraulics, formed the mother company, KION.

OM Carreli Elevatori S.p.A has a sales network consisting of 200 dealers and 2,800 technicians, based in Europe. The Bari plant, which was modernised in 2001-2002, received an investment of 23 million Euros and the company's goods and stocks are valued at over 11 million Euros. 7,550 products, at the Lainate warehouse, are managed on radiofrequency, while 5 robotic handling systems transport products within the modern warehouse. 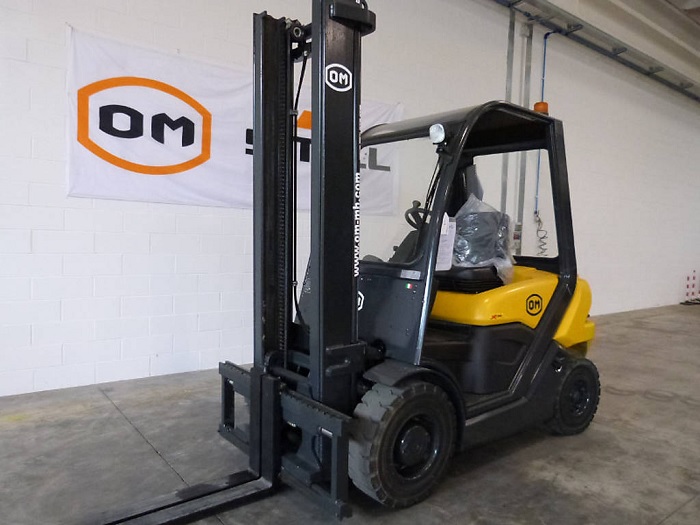 Check out these awesome machines on Surplex:
Used OM Machinery