Bandsaw machines & block bandsaws for woodworking 17 Items
Categories
Filter
Subscribe to search
Not found what you are looking for?

A band saw is mostly used in woodworking (woodworking band saw), but also for cutting metal (metal band saw), plastic, concrete etc. The central part of this widely used saw is a continuous band saw blade, which allows a regular cut. While in carpentry workshops are mostly used the smaller narrow band saws, bigger companies mainly use the stationary machines. A special form of the band saw is a log band saw, which is used in a sawmill and it converts a tree trunk into a sawn timber. On Surplex you can find a variety of used band saws with different cutting height. Used but in a good shape! 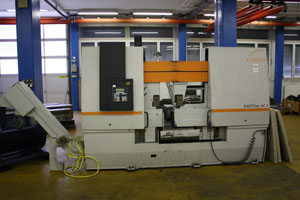 What is a band saw?

A band saw is a machine tool used for sawing a work piece using a welded continuous band saw blade, made out of hardened steel. Band saws are mainly stationary industrial machines. There are also electric hand-held band saws and smaller bench band saws available on the market, which are commonly used in carpentry workshops. The band saw is characterised by its high level of productivity; its continuous band allows for an uninterrupted cut. Normally, workpieces are cut vertically, but there are also machines that work with horizontally positioned saw bands.

Areas of application for band saws

The basic structure of wood saws has been around since the 19th century. A typical band saw (also called a belt saw) consists of a continuous metal blade riding on two wheels that rotate in the same plane. It contains deflection rollers on the top and bottom of the bandsaw machine, which are covered by two closed hoods. A saw band is guided over, and powered by, these rollers, thus making it possible to have a continuous cut. The feed rollers are on the machine table, and they are built to be more robust. A sliding table is used in some wood band saw constructions, to ease the guiding of the workpiece towards the saw blade, while a titled table allows the work piece to be cut diagonally. A further addition to the bandsaw machine table can be the mitre fence, which is used to create angled cuts. It is only possible to access the area to be cut, which is to prevent workers from coming in contact with the band. This area also determines the height of the workpiece that is positioned on the machine table with stops.

The structure of a band saw

The wood band saw is used in small workshops, as well as for the processing of large, solid wood, and furniture production. Although they are primarily used in the woodworking industry, band saws can be used to saw a wide spectrum of different materials including metal, plastic or even concrete (in addition to solid wood and wooden workpieces).

Characteristics of using a band saw

Some of the important parameters for the performance criteria of a band saw include cutting speed, the feed and the positioning of the teeth. The efficiency of a band saw is mainly gauged by its separation speed. The optimal cut is determined by the perfectly coordinated relationship between cutting speed and the feed. A coated saw band can be used if a cooling lubricant is used during the sawing process. Another important aspect of band saws is the right level of strength. This really influences the durability of the used bandsaw band because if a band with the wrong dimensions is used, it can break very easily. A basic rule is that the band's strength should equal 1/1000 the diameter of the deflection roller. For example, with a roller diameter of 500 mm, the strength of the band should be 0.5 mm.

Performance criteria of a band saw

A wide range of manufacturers has specialised in producing band saws and other woodworking machinery, some of the most prominent ones being ACM, FELDER, HEMA, MAKA, PANHANS, METABO, MAFELL, KIRCHNER, BAEUERLE, and MEBER.

You can often find quality used band saws for sale manufactured by those and other well-known suppliers in our numerous industrial auctions as well as on our regular second hand band saw sale page. Visit us regularly as our used bandsaws and other used machines offer is constantly updated or subscribe to our newsletter to receive the information about all special offers in the future. 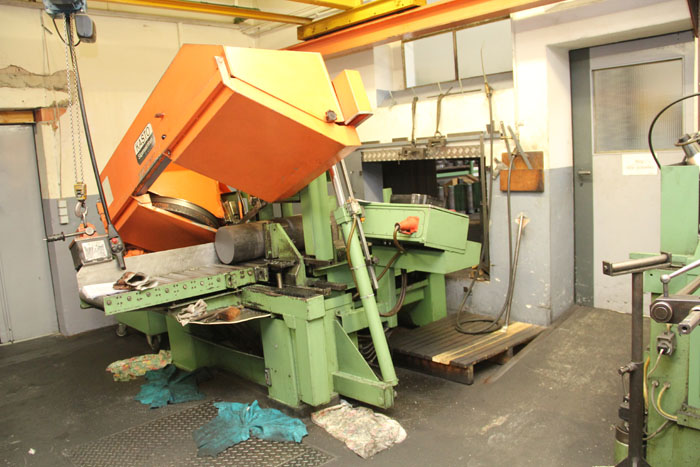 Check out these awesome items on Surplex:
Band Saws