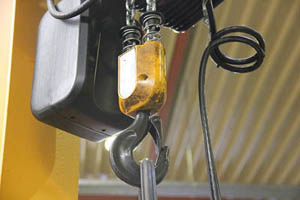 Slewing crane for industrial use

Manual transportation of small loads, as well as the relocating and bringing together of loads, is timeconsuming and difficult. A slewing crane is a suitable solution for this problem and can be installed directly at the work space. A comprehensive range of lifting mechanisms allows the crane to lift a variety of products, transport them and relocate them safely. This reduces the set-up and transportation time required. The waiting time for the hall crane, which is located on the other side of the hall, is also eliminated.

Personalized A slewing crane is available in a variety of structures. Two examples are the wall-mounted slewing crane and another un-related version, the pillar-mounted slewing crane. Operation of these cranes is easy and can be done after a short amount of training. The wall-mounted slewing crane is made out of a wall mount supported by crossbeams. A runway operated by an electric motor is located on these cross beams, which means that every desired point within the radius of the cross beam can be reached. The wall in the hall could be a restriction. This disadvantage is commonly found with pillar cranes that often have to be used for several machines. This type of crane contains a stable pillar that is anchored into the ground and a swinging arm with moveable runways. The runway contains a steel cord with a corresponding winch, which has a hook on the end or another device used to lift accessories. 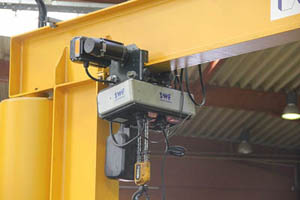 History and development of the slewing crane

The manual slewing crane was already used in ancient Egypt. The work was made easier with the invention of the electric motor. This motor provided the power for lifting and moving the workpieces. Everywhere where loads have to be moved, a slewing crane is available as an alternative to the goliath crane. It is mainly suitable for smaller loads. However, there are versions available which have a carrying capacity of up to 100 tonnes.

Areas of application and examples of slewing cranes

The slewing crane has the widest application possibilities in industry, particularly as a support next to the machines. It allows raw material, as well as finished products, to be placed in the right place within a hall so that it is ready to be processed or transported away. The slewing crane can also be used in other areas. In yacht harbours, boats are loaded onto automobiles or into the water using slewing cranes.

Several companies have specialised in the manufacturing of slewing cranes. Some of the most recommended suppliers include ABUS KRANSYSTEME, VETTER KRANTECHNIK, DEMAG, INGERSOLL RAND, PROBST, GIS, VERLINDE, STREET and KITO. 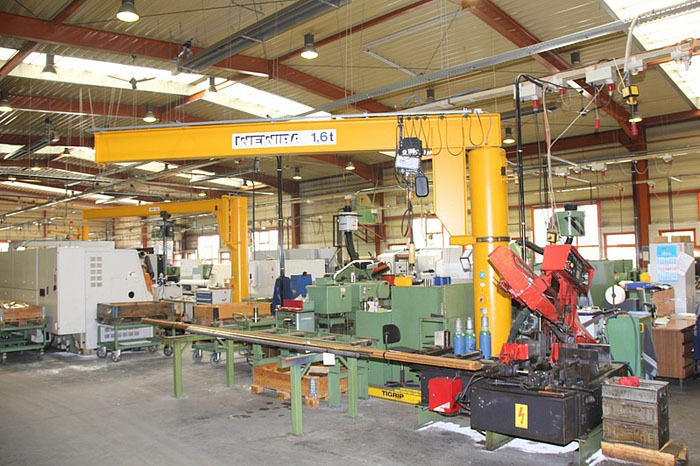 Check out these awesome machines on Surplex:
Jib Cranes