WEILER is a German tool machine manufacturer based in the Bavarian town of Emskirchen. The company has been in operation for over 70 years and focusses on the manufacture of drilling and turning machines. An international distribution network and acquisitions of other manufacturers have made WEILER a major player in its industry. More than 150,000 units have been sold – a clear indication of the success of the WEILER brand. 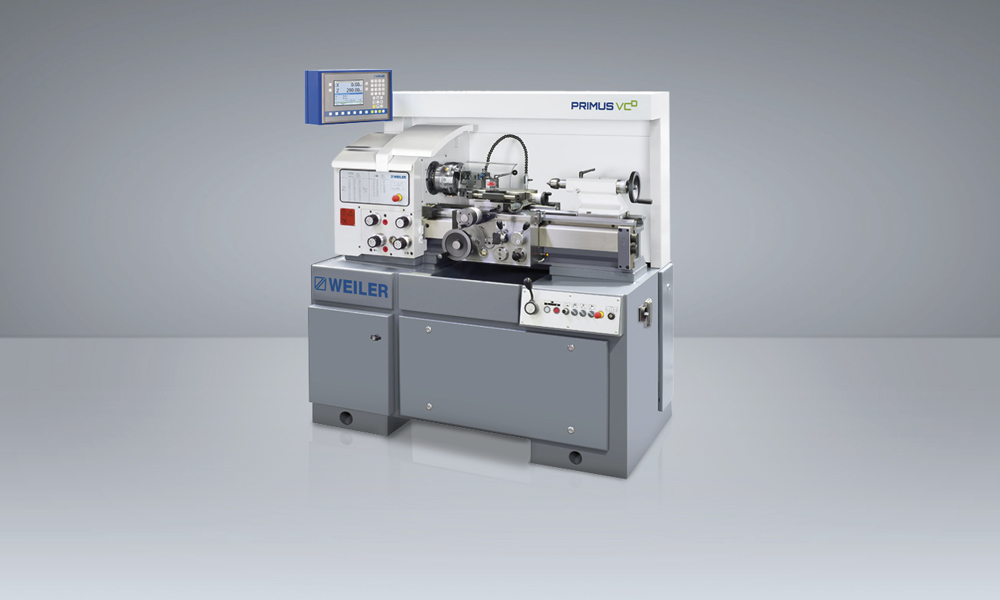 WEILER PRIMUS
This is the smallest of their lathes and it is primarily designed for training purposes. A centre height of 140 millimetres and distance between centres of 500 millimetres ensures both small- and mid-sized workpieces can be processed. This series only features the PRIMUS VCD model.

WEILER PRAKTIKANT
PRAKTIKANT machines are available from the PRAKTIKANT GSD and VCD series, as well as the recently developed VC Plus line. They are ideal for producing individual parts with a distance between centres of up to 650 millimetres.

WEILER CONDOR
Distances between centres of up to 800 millimetres and advanced ‘VCplus’ display/control electronics make CONDOR lathes the right choice when a PRAKTIKANT device has reached its limits. The CONDOR is only available as a CONDOR VC PLUS. 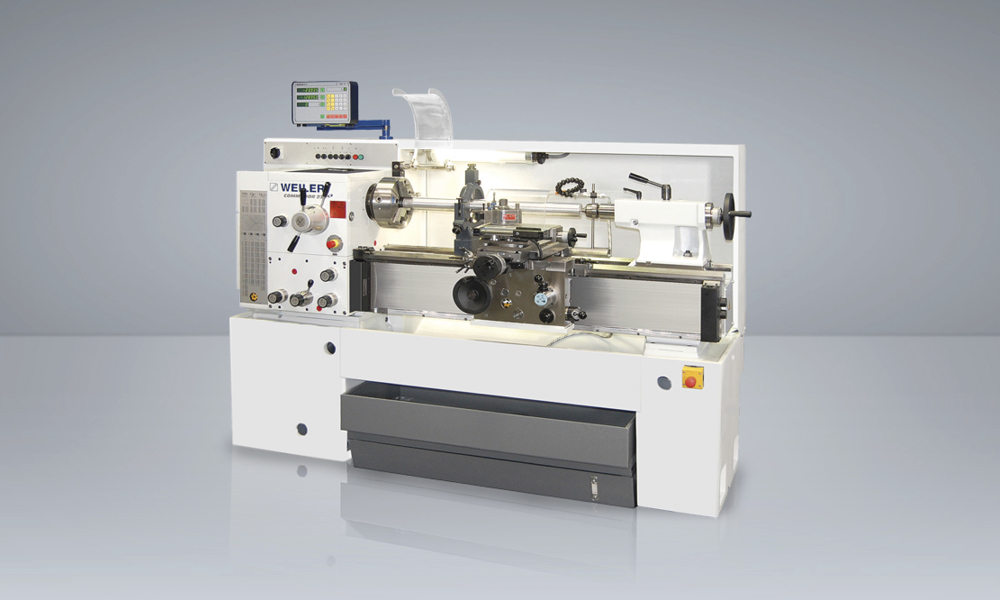 WEILER COMMODOR
A 1000-millimetre distance between centres and high feed and turn rates endow the COMMODOR Series with the qualities of a large-scale production machine. The WEILER COMMODOR Series features four models, which differ primarily in terms of ease of operation and the equipment included.


If a CNC lathe machine is too large for your requirements, WEILER also produces conventional servo-controlled devices as a way of getting started in programme-controlled machining. They feature automatic processes like their CNC cousins but the ease of use is not at the same level. Nevertheless, servo-controlled devices are entirely sufficient for those wishing to produce simple components. WEILER offers these devices in two series: the WEILER C30 and WEILER C50, which offer distances between centres of 750 - 2000 millimetres.

The following models are available:


All machines within this range feature modern CNC controls based on the tried-and-tested SIEMENS controls for machining equipment, but they have been further developed by WEILER. In total, WEILER produces a selection of eleven models of cycle-controlled turning machines, which, in technical terms, differ only with respect to the distances between centres. These are highly productive machines and cover a wide range of potential applications thanks to their generous distancing between centres (750 millimetres up to an impressive 15,000 millimetres). This makes it possible to process especially large precision turned parts in batches of any size. Even in the larger version, WEILER cycle-controlled lathes meet the standards of DIN 8607.


The ability to produce long workpieces can be highly beneficial for a company, however, owning a separate CNC lathe with a distance between centres of more than 10 metres can be a very expensive investment. WEILER therefore developed solutions to ensure companies need not turn down any orders because they have decided that operating various lathes in tandem would be economically unviable. The company produces this type of machine in two series: WEILER V90 and WEILER V110. The four-guideway bed-type machines manufactured by WEILER offer two unique features:


A four-guideway bed-type machine thus enables a company to run three devices in one and produce a wide range of products on the basis of a single investment.


These are chiefly designed for producing small components in large batches. The difference between CNC and cycle-controlled machines is that the former can only clamp parts on one side. WEILER therefore does not indicate any ‘distances between centres’ for the maximum component size; only ‘travel paths’. The three machines can process components with diameters of up to 240 millimetres and a length of 530 millimetres. An interesting feature of this line of devices is that WEILER’s smallest CNC lathe comes with the largest selection of tools: the DZ 40 can supply up to 16 tools. The somewhat larger DZ 45 and DZ 65, by contrast, only comes fitted with a tool holder featuring 12 slots. 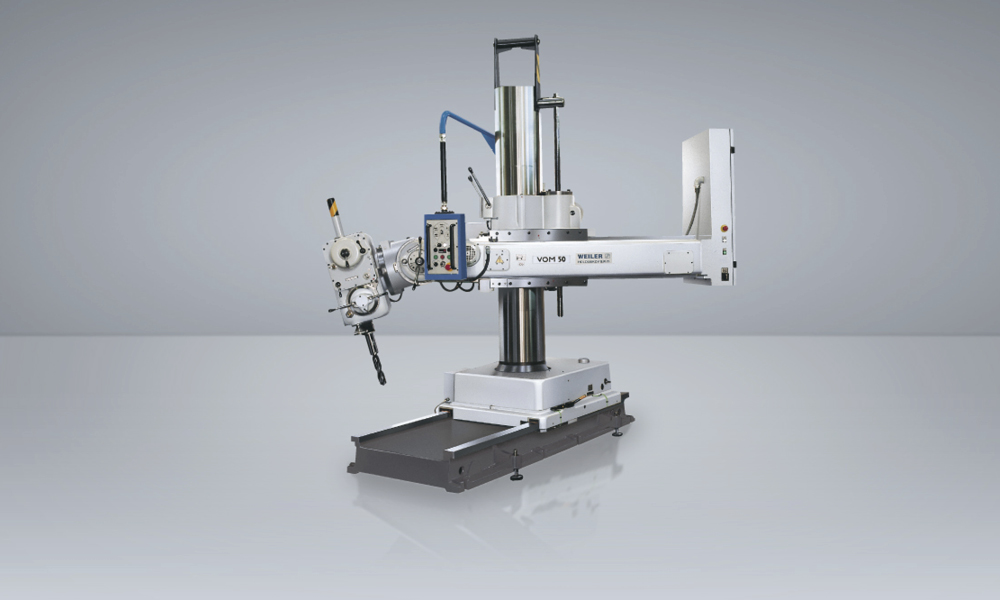 In addition to their large selection of lathes, WEILER also produces a range of interesting products for the field of precision drilling. WEILER discovered a gap in the market for portable drilling machines where there was very little on offer from competitors. They cannot be operated as hand-held devices but are certainly capable of being moved around the workshop as needed. Their 6.5-tonne specialist machines are popular amongst power plant and ship builders owing to the fact that additional equipment can be fitted on-site to expand applications, without entailing major logistical difficulties in moving around heavy components. WEILER also applies their ‘nothing in half measures’ philosophy when manufacturing their radial drilling machines. These devices are solely intended for difficult machining jobs on heavy-duty workpieces and are incomparable with conventional bench and column boring machines in the industrial sector. WEILER sets new industrial standards with its three models, which lack nothing compared to their most popular rivals.


WEILER has no proprietary milling machines in its current range, but the company acquired the milling machine manufacturer KUNZMANN in 2016 to increase its portfolio of machining equipment. The variety of products on offer from KUNZMANN is comprehensive, but whether the company will remain independent and retain its name, or change over fully to WEILER, is yet to be seen.

Used machinery produced by WEILER is a great option thanks to the company’s strong focus on excellent customer service. This includes going above and beyond the statutory period of 10 years following the end of a series, which stipulates that services continue to be offered and spare parts are kept in stock. This long-term security for replacements ensures buying a used WEILER machine tool will be a worry-free experience.

WEILER is one of the leading manufacturers of conventional lathes and has a long and prestigious history. This has led to a large selection of various types of lathes, which all sell at greatly differing prices. Small and simple table-top lathes manufactured some time ago can be sourced for as little as a few hundred euros.

Affordable, compact centre lathes by WEILER are also a cost-effective choice. Those looking for a WEILER lathe for sale under 2000 euros should look to devices built between the 1950s and 70s, which are more than sufficient for hobby purposes and can help create wholly usable products.

The majority of used WEILER lathes on the market, however, are CNC machines designed for industrial use. Of course, these cost significantly more but the productivity that can be achieved is just as high as if they were new. The selection of used WEILER milling machines is very limited. The same applies to the range of WEILER radial drilling machines on the second-hand marketplace.

Check out these awesome items on Surplex:
Used WEILER machinery