According to the Association of German Engineers, industrial companies in Germany have a lack of robotics. While big companies in the mechanical engineering, automotive and beverage industries are promoting automation, many SMEs aren’t using any robots. In this respect, precisely small companies could benefit from automated production processes. Investing in robotics, that is changing into handling systems, robotic cells, sort facilities and so on, will be rewarded with a better labor productivity and a lower scrap rate. Even investment costs are kept low when buying second hand robotics and machines at Surplex. 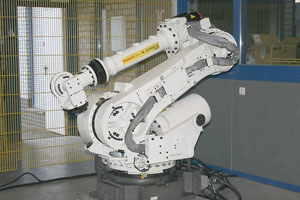 Through industrialisation and automation, robot technology has gained more responsibility. Special companies were brought together to find solutions for these complex tasks. Robot technology allows for the comprehensive rationalisation and automation of manufacturing processes for industrial goods. This increases the quality of the goods, while at the same time saving money and time. Different types of industrial robots are used throughout industry, including jointed armed robots, gantry robots, robot cells, welding robots, painting robots, palletizing robots and loading and unloading robots for machines.

The exact composition of the robot depends on where it will be applied. A painting robot has the task, to mimic the movements human workers undertake during painting tasks. This is the same for the welding robot. Therefore, these robots need to be very mobile. Loading and unloading robots are implemented in special areas and are built differently. Generally, every robot contains a frame with corresponding clamps or gripping arms to transport the workpiece. Robot technology is usually computer controlled. Small servomotors are used to control movement sequences. 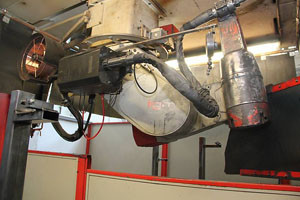 History and development of robot technology

Robot technology is used to automate processes usually undertaken by humans. Robot technology was first developed by the military. Its first application in industry was in 1973 in Germany, with 6 operated axles. Robots were implemented in areas that were too dangerous or in unsuitable working environments, like painting and lacquering. Robot technology is not only restricted to industry. In 2004, the first humanoid robots were developed, which undertake more roles than the conventional robot. This all became possible with the development of transistors, circuits and smaller microcomputers. Even nanotechnology and precision engineering were important factors in the development, because the smaller the technology, the more effective the robot technology. 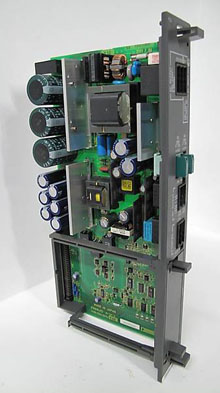 Areas of application and examples of robot technology

Robot technology is widely implemented in industry to make production processes automatic. They are used to help install complete production lines that can independently process a product up to its final stages. An example of this is in the automobile industry. Welding robots are implemented for the body work and painting robots are used for colouring. The manufacturing of computers without robot technology can no longer be imagined. Robot systems are now being manufactured as modular constructions, which makes them even more versatile.

Several companies have specialised in the manufacturing of robot technology. Some of the most recommended suppliers include:


Just regularly visit our industrial auctions to find your desired machine in robotic technology for your needs. Also we recommend subscribing to our newsletter to always be informed first about our upcoming industrial machine offers.

Check out these awesome machines on Surplex:
Robotics